Doing your own thing

About a month ago, I read a weird conversation on Facebook concerning a couple of comic creators and their fans arguing back and forth about issues of censorship and lots of “keeping it real” talk. I’m not going to name drop, but I was somewhat inspired to write a little blog post of my own because it made me think. The one creator had sold his creation the the other creator, and the argument was centered around the new owner not “getting” the creation in question… of writing a watered down version to appeal to a broader audience and how that wasn’t “keeping it real”. Without simply rehashing the entire discussion, I’m just going to talk about what it made me think about concerning creator rights and ownership. Years ago, when I was fresh out of school, the only thing I wanted to do was draw Spider-Man. I was chomping at the proverbial bit to draw for Marvel or DC on one of the many characters I loved growing up. I was drawing page after page of samples trying to “break in” and it was going about the same as a bazillion other stories. Lots of rejection letters for a while and for a while more a few really encouraging letters pushing me forward.Then an editor at Marvel sent me a sample script of a 6 page sequence from an existing Spidey script to test me out. I was making progress and getting further along and did my level best to knock it out of the park. I submitted my pages and got yet another “good but not good enough so keep at it” letters and was crushed. Then I made a mistake. I went out and bought the actual comic this script was from. It sucked. It was drawn by an established artist and it was a hot mess. The anatomy was terrible. The storytelling was all over the place. I couldn’t believe that my pages were nit picked and slammed and the actual pages that were published were terrible. And I’m not saying this simply out of ego but some degree of empirical knowledge of what does and doesn’t look good. And I was fairly fed up. I gave up trying to break into comics that day and haven’t turned back since.I had already established myself as a graphic designer and illustrator professionally at that point and chose to continue in that field where I work to this day. Of course, I still draw comics. But since that day, I decided to draw my OWN comics. Was it partly out of depression and disillusionment with the system and the rules of “making it” in the industry? Absolutely. Do I regret it? Not one little bit.
See, I LOVE comics. I love reading them and love MAKING them. I love telling stories with art more today then I ever have. And that love is ultimately what I decided to protect.
As a graphic designer, I work for hire. I draw what I’m paid to draw and I do what I’m told. Even if I think my first drawing was perfect, I’ll re-draw it over and over to make my client happy. And usually, the final piece (in my opinion) never looks as good as the first piece I submitted, but as a graphic designer and illustrator, I’m being paid to do what my clients want, not to satisfy my own creative drives or artistic integrity.
Which is why I create my OWN comics. Because I decided that I was starting to hate drawing samples. I was starting to hate second guessing every line. I was starting to hate changing panels, line weights and camera choices for arbitrary reasons I often disagreed with. And I realize that I’m not some kind of comics god, but I also don’t give a rat’s ass. I love comics. And I love MAKING comics and I’ll be damned if one of the biggest passions in my life ever becomes a painful chore because some editors or publishers or bosses want to give me shit or make me change what I want to do creatively in my own damn books. And that can’t happen because I do my own thing.Maybe if I played by the rules and allowed myself to be broken, I could be drawing comics for a living and not have to split my time between graphic design and comics, but then I wouldn’t love comics as much anymore. It would become a real JOB. So I self-publish. Currently, The Wellkeeper sells enough at conventions to support itself and pay for the conventions and the printing and a little more. It’s not a job but it’s not just pizza money. Am i investing more in my TIME then it’s worth financially? Probably. But I really don’t care. I’d be drawing these comics even if I wasn’t self-publishing them. I’d be drawing them if only me and my fiancee were the only people reading them. And right now, nobody can tell me to change anything. No publisher can tell me that “Comics with fat girls as leads don’t sell. Make Zoe skinny.” No editor can tell me to draw less cartoony. No higher-up can make me change a line and I wouldn’t have it any other way.
Posted by Dee Fish at 11:17 PM 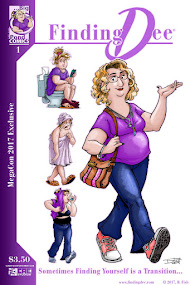 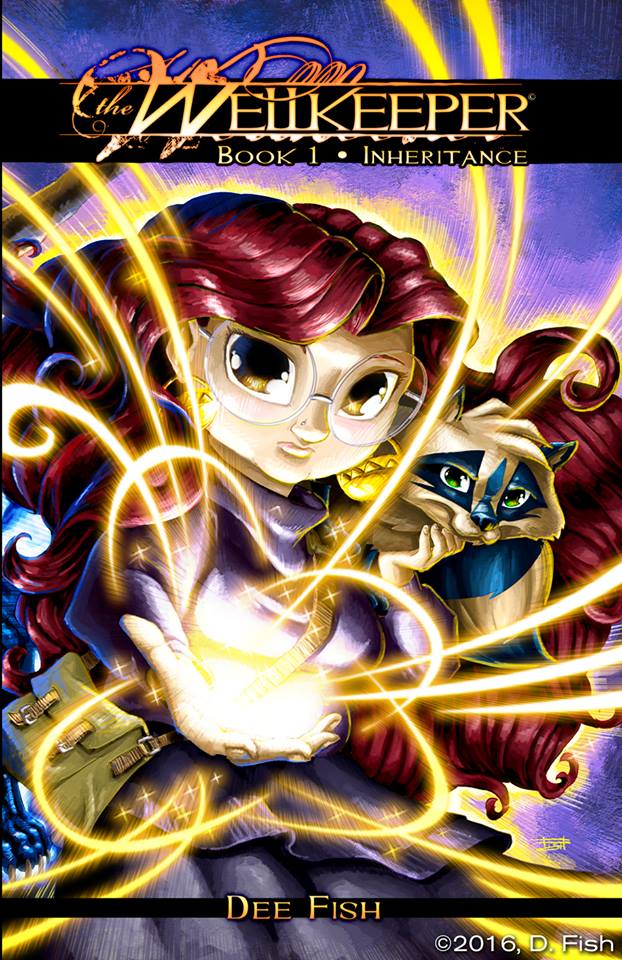